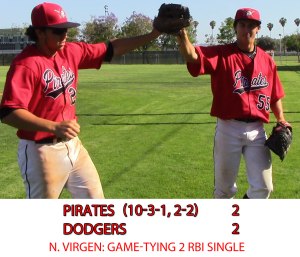 After trailing 2-0 with two outs in the bottom of the ninth and no one on base, the Pirates put together the ultimate two-out rally to knot the score at 2 apiece in Game 2 of the doubleheader Tuesday afternoon at Cal Poly Pomona.

Christian Kelley took one for the team. Michael Johnson cracked a double. Nathan Virgen belted a two-run single up the middle.

The Pirates were determined to finish the game, but the Dodgers, who had all the momentum ripped away from them by the scrappy Pirates, decided to call it a day.