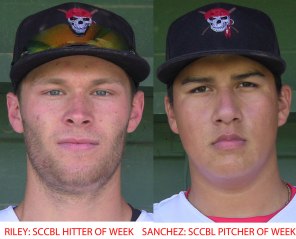 This week gets even better for the Inland Valley Buccaneers. After defeating the Pirates on Monday 11-2 and enjoying late inning heroics on an RBI by Nathaniel Acosta in the bottom of the ninth inning to tie up the game against the Legends on Tuesday, the Bucs now have two players earning player of the week accolades.

Riley has been on a tear as of late, especially during the past week when he went 12-for-23 with three RBI and two runs scored. Riley is currently batting .367, which leads the Bucs.

Sanchez tossed 10.1 innings and struck out 12 this past week, while only allowing one run. He earned a win against the Lancaster Rounders. On the season, Sanchez has struck out 20 in 19.1 innings, while posting a 2.33 ERA.

This entry was posted in Uncategorized. Bookmark the permalink.