The Pirates return 16 players from their maiden voyage.

SCCBL all-stars AJ David, Kyle Jackson, Christian Kelley and Taylor Valentine are all back to help the club improve upon last season’s 12-11-1 mark.

Taylor Valentine posted gaudy numbers, while dominating the competition in 2013. The Cal State San Bernardino senior-to-be earned Pitcher of the Year honors while finishing 5-0 with a 0.66 ERA and 37 strikeouts in 40.2 innings.

AJ David and Kyle Jackson led the Pirates offensively, tying each other for the highest batting average with an extraordinary .340 clip. David is headed to Cal Baptist after earning Junior College All-American honors at San Bernardino Valley College. Jackson is hungry to get back on the field after breaking his hand earlier this year.

Kelley is the field general behind the dish. The Cal Poly Pomona backstop prides himself on being one of the best defensive catchers in the game. He also came through with the stick in his first SCCBL season hitting .296 with a .405 on-base percentage. Runners beware when the Kelley’s cannon is on display.

Lewis & Clark senior-to-be Jorge Ortega is back after just playing in the NAIA World Series. Three more standouts who earned scholarships in the past season are Greg Espinosa, who will be attending D-1 Houston Baptist, Jonny Reynoso, who joins West Texas A&M and Nathan Virgen, who takes his talents to Kentucky to play for Lindsey Wilson.

A slew of San Francisco State Gators is led by returner Cory Davis, who earned Second Team All-CCAA Conference accolades in 2014. The three other Gators are new to the Pirates and will make their presence felt all summer. Bryce Cherry Jr., Fernando Escobar and Ryan Romero are chomping at the bit to put on the Pirate red. 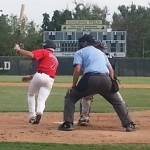 While the 16 returners are proven commodities, the 15 new players will bring even more talent to a loaded Pirate roster.

Meanwhile the Buccaneers are looking to make noise in their first season. They’ll immediately get to test themselves against the Pirates in three of their first four games.

Bryce Brooks shifts over from the Pirates to the Bucs. Brooks is the nephew of former MLB player Mark Kotsay, so baseball runs in his bloodlines. This past season at Rio Hondo, he proved his defense is top-notch by earning a Gold Glove.

Brendan Campbell figures to be a key player after earning All-Conference Honorable Mention accolades as a freshman at Citrus College. Jayson De La Pena followed in suit also receiving All-Conference Honorable Mention notoriety at Citrus, while posting a microscopic 0.79 ERA en route to striking out 24 batters in 22.2 innings of work. Michael Reina and Miles Ryan are teammates of Campbell and De La Pena at Citrus.

Gerardo Ramirez, a local product from Diamond Bar High, will make the step up to the collegiate level. At Diamond Bar, he put up ridiculous numbers in 2014 compiling a 9-2 record with a 2.80 ERA and 65 strikeouts in 64 innings. He hit a robust .364 as well.